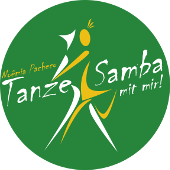 Samba de Gafieira is a Brasilian couple dance combining the Brasilian craftiness with the grace of Waltz, the sensuality of Salsa and the elegance of Tango Argentino. Light-hearted figures alternate with elegant movements and dynamic combinations. A defining element are the many „Off-Beat“, syncopated rhythms.

Samba as ballroom dance as well as musical movement was born at the beginning of the 20th century in Rio de Janeiro. Its origine lie in the combination of afro-brasilian rhythms and dances (like maxixe) and the colonial European dance and music culture. The pair dance developed over the years in the „gafieiras“ – the dance locals in Rio, attended mainly by the working class. At the same time also the musical style evolved, taking on a multifaceted style. In later years came new influences from other dance styles, as well as original developments.

The present-day Samba de Gafieira, again a very popular dance among young dancers, is the latest stage of this development: a variated and complex blend of steps, movements and figures, which well fit the multifaceted character of the music.

In parallel to Gafieira, on the hills of Rio – the “Morros” – and especially in the most poor suburbs, a solo dance named “Samba no Pé” developed. Stongly influenced by the shows prepared for the Carnival, it is nowadays known outside Brazil as the iconic manifestation of Samba because of the popularity of the “Carnaval do Rio”. Still, it is just one of the styles which this musical form can be danced to.

The international ballroom Samba has taken a completely different path with respect to “Gafieira” and bears not much relationship with the ballroom dance as it is danced in Brazil.

Today there are many possibilities to listen to Brasilian music within Europe.

On Messenger Telegram, samba can be listened to on the channel “Samba DJ”:

Also on Youtube there are many Playlists for Samba music suitable to dance Gafieria.

For example by Reduto do Samba